Emirates Group, which owns the world’s largest long-haul airline, slumped to its first loss in more than 30 years after the pandemic reduced demand for air travel to a trickle.

The 14.1bn dirham (£2.8bn) loss for the state-owned company came alongside a 24pc reduction in headcount over the six months to September, Emirates said.

Revenue fell 74pc as an increase in cargo traffic failed to offset the decline of commercial flights.

“We began our current financial year amid a global lockdown when air-passenger traffic was at a literal standstill,” said chairman Sheikh Ahmed Bin Saeed Al Maktoum.

“We expect a steep recovery in travel demand once a Covid-19 vaccine is available, and we are readying ourselves to serve that rebound.” 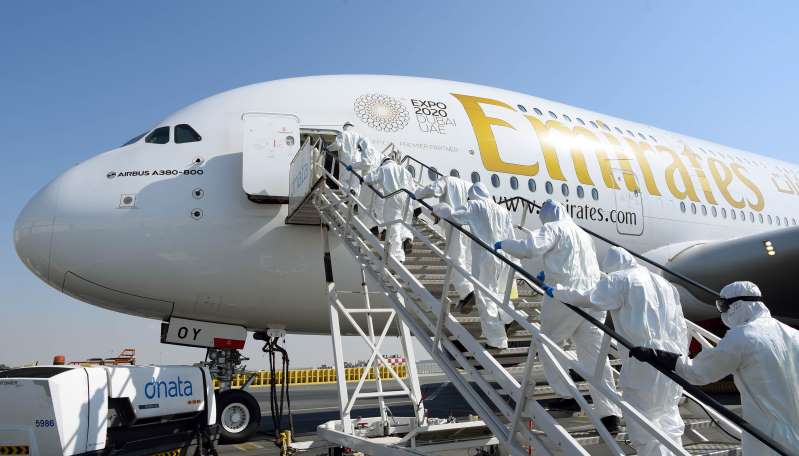 Emirates Airline was particularly hard hit by the pandemic because its business model is built around the largest commercial jets - the Airbus A380 and Boeing 777 - carrying passengers from all corners of the globe.

Long-haul travel is widely expected by the industry to be the slowest to recover from the crisis as passengers shy away from lengthy journeys and virus hotspots.

The Dubai-based carrier, which started resuming regular passenger flights on May 21 after suspending most trips for almost two months, has recovered about a sixth of its pre- pandemic network.

The Emirates Group, which also includes ground-handling firm Dnata, cut about 26,000 jobs over the six-month period, bringing the total to just over 81,000.

This was to adapt to “expected capacity and business activities in the foreseeable future”, the company said.

While the group’s cash position fell to 20.7bn dirhams from 25.6bn dirhams six months earlier, Emirates has recieved support from Dubai’s government, which has put more than 7bn dirhams into the company since March.

Reference: The Telegraph: Bloomberg  8 hrs ago

We have 364 guests and no members online