Oleksandr Usyk has not agreed to step aside and allow Anthony Joshua to fight rival Tyson Fury for the undisputed heavyweight championship next.

IBF, WBA and WBO champion Joshua and WBC belt holder Fury are currently in the midst of discussions for a super fight this year, in a fight that would be one of the biggest in the history of boxing.

However, the biggest spanner in the works for Joshua and his promoter Eddie Hearn is the Ukrainian challenger Usyk, who is the mandatory challenger for AJ's WBO belt.

Usyk beat Derek Chisora to earn his chance to fight for the heavyweight belt, after he vacated all of the cruiserweight titles as the undisputed champion and moved up in weight.

However, Usyk's promoter Alexander Krassyuk said that his fighter has no intention of stepping aside and and is ready to fight for the title shot he's earned. 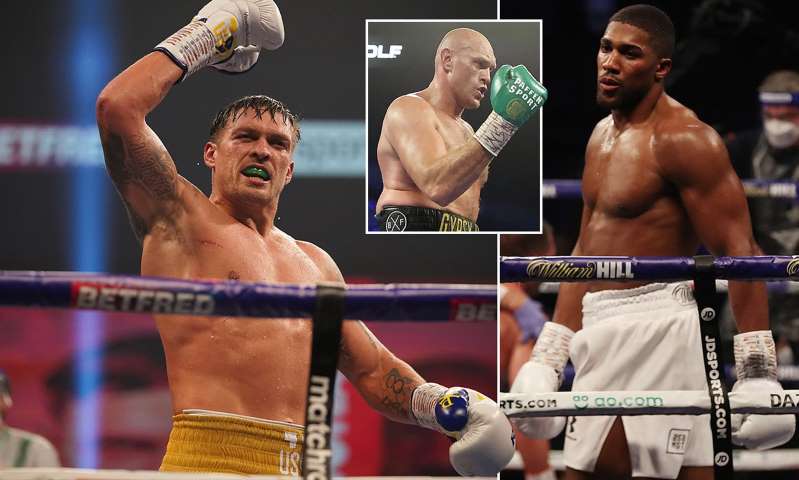 He told Sky Sports: 'According to now the deadline is more for Fury and AJ not for Usyk.

There were talks about an interim title or the AJ vs Fury winner relinquishing the WBO title the next day [after they fight].

'But as for today Usyk is the WBO mandatory and never gave his consent for the [Joshua vs Fury] bout to happen without him.

'Usyk is in good conditions now, he successfully recovered from his last fight and looks forward to fight challenge the title this spring.

'A non-title fight has never been under discussion and I really hope it will never be.'

Despite this, Joshua remains optimistic of finalising a deal with Fury and getting the opportunity to become the first undisputed heavyweight champion since Lennox Lewis in the early 2000s.

He recently said: 'I promise you, conversations and face-to-face meetings are happening with representations of my team and Tyson Fury's team.'

Should they come to an agreement, Joshua and Fury will sign on a two-fight deal, meaning there will be a rematch regardless of the result in their first bout.

The whereabouts of the fight, being earmarked for June 2021, is still yet to be determined with the reality of allowing a sellout crowd at an arena in the UK anytime soon looking highly unlikely.

Eddie Hearn explained that due to the nature of how big the fight will be for both boxers, their teams are looking to maximise the revenue which could lead to the rivalry being settled abroad.

'Both camps have a responsibility to maximise the revenue for their biggest fight - this is the pinnacle of their careers, the biggest moment, nothing will ever beat it,' Joshua's promoter Eddie Hearn recently told Sky Sports.

'At the same time, we all recognise this is two Brits fighting for the undisputed championship of the world. If there is a way to do it in the UK? Fantastic.'

We have 47 guests and no members online