Queen's aide slaps down Meghan Markle claims over Archie name change row: 'No part in it!'

Queen's aide slaps down Meghan Markle claims over Archie name change row: 'No part in it!'

Thomas Woodcock, the Garter Principal King of Arms and Senior Herald, slapped down suggestions he had any involvement with the modification of Archie's birth certificate. Mr Woodcock is a member of the Royal Household and chief adviser to the Queen on heraldry as well as ceremonial matters.

Writing in the Daily Mail, royal commentator Rebecca English said: "The New York Post, seemingly guided by the Sussexes' representatives, suggested yesterday that the changes were required by the Garter Principal King of Arms and Senior Herald, Thomas Woodcock".

However, Mr Woodcock appeared bemused by the suggestion he had any involvement in the change of the civil document regarding Archie, Ms English said.

The Queen's aide himself told the Daily Mail: "This doesn't ring a bell with me.

"I may have said some time that if you are the Duchess of Sussex then that is your name.

"'Rachel Meghan, the Duchess of Sussex' rather implies that you are a dowager, or widowed. 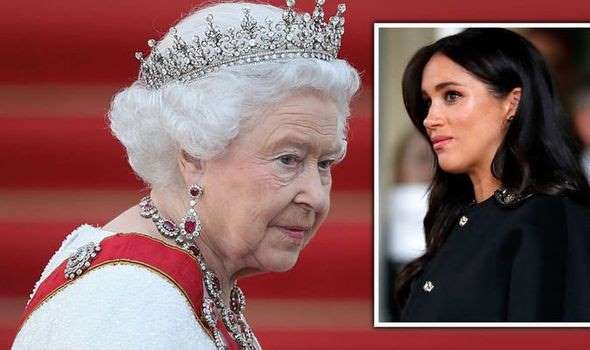 "I haven't had any part in it but am very happy to take the blame, if that is what's required.

"It is undoubtedly my role to advise, and maybe I offered some thoughts in one context but they are being used in another.

"Whenever I am asked a question, I do try to answer it as honestly as possible.

"I just have no recollection particularly of being asked for any advice on how things should be entered on a birth certificate."

The monarch's aide was named on the New York Post's Page Six as the person who "officially required" Meghan to present her name styled as "Meghan, HRH The Duchess of Sussex" on her passport and all official documents.

On Sunday, it emerged Archie's birth certificate had been changed 19 days after it was first issued in May 17 2019.

The first was the addition of the title "prince" to Prince Harry's field name, which had been originally omitted.

This sparked speculation on the reason behind this move, with The Sun saying it could be seen as a "snub" to the Cambridges or a tribute to Princess Diana.

On the other hand, Prince William's birth certificate only presents Diana's title.

These precedents within the Royal Family show there isn't a settled royal protocol on how to fill out birth certificates.

Shortly after the story of the birth certification broke, a spokeswoman for Meghan issued a statement saying: "The change of name on public documents in 2019 was dictated by The Palace, as confirmed by documents from senior Palace officials.

"This was not requested by Meghan, The Duchess of Sussex nor by The Duke of Sussex."

But royal aides said there was no royal protocol in place for civil documents.

They added: "The statement and its wording poses more questions than it answers unfortunately."

We have 168 guests and no members online