Lionel Messi is reportedly ready to sue as many as five 'suspects' that he believes may have leaked his £492million Barcelona contract.

Messi signed the deal in 2017 and it will end this June when the 33-year-old will be able to leave for nothing.

The significant leak revealed that the combination of fixed salary, image rights, variables and tax Barcelona will have to pay on the contract amounts to €555,237,619 (£492m) over its duration.

Messi and his camp have been left incensed by the leak of such confidential financial data and Catalan radio show RAC1 report that the player is now looking into legal action.

The report explains that Messi and his team believe only five people at Barcelona had access to his contractual information. 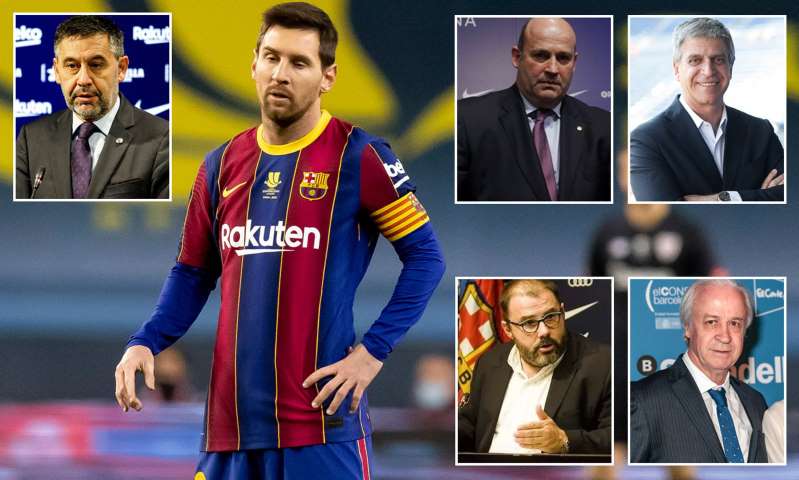 £1.75m – what he receives for playing 60 per cent of Barcelona's games

Bartomeu, who resigned from the club last October and whose relationship with Messi soured when he wasn't allowed to leave last summer, has already spoken publicly to distance himself from the leak.

'It's completely false [I was involved in the leak],' Bartomeu told TV3 in Spain.

'This is a very serious issue because it's completely illegal to leak any professional contract to the media.

'It's easy to make accusations but this is not a joke and it's going to end up in court.

'Messi deserves everything he earns, be that for professional or commercial reasons. Without the pandemic, Barcelona would be more than capable of paying those numbers.'

Mestre, who resigned from his position after nine years with the club in April 2019, also distanced himself from the leaked contract and said he discovered the story 'in the press' in an interview with Cadena SER radio.

'Messi's helped the club bring in much more revenue. Whoever says his contract has ruined Barça either has no idea or is acting in bad faith - or both,' the former vice-president said.

'It surprises me. It's super confidential. It's the first time a contract has been leaked and I don't understand why. I have not spoken with Bartomeu of this subject. I have found out through the press.'

Grau, CEO at the time Messi signed the deal, 'categorically denies' any involvement and claimed on Catalan radio show Esport3 that 'there are many external people who also have the contract and may have leaked it'.

Barcelona boss Ronald Koeman was left furious at the story of the leaked contract and called on the club to sack whoever they discover responsible amid calls for an internal investigation.

The irate Barcelona coach said: 'What has come out is intended to damage him. Messi deserves respect.

'He has done so much for Spanish football. There are people out to hurt Barcelona and Messi.

'If it turns out to be someone on the inside then that is very bad and they should have no future at the club.'

Revealing Messi to be the highest-paid sportsman of all-time by some distance, the contract guarantees the player €138m (£122m) a season in gross salary.

With five months left on the deal, Messi has already earned an eye-watering €511m (£452m).

The report also broke down some of the bonuses awarded to Messi since the 2017-18 campaign.

The Argentine is also guaranteed a whopping £3.1m (€3.5m) if Barcelona win the Champions League – something the club hasn't achieved since 2015.

Other variables include Messi banking another £1.75m (€1.9m) if he plays 60 per cent of games while he will receive extra payments each knockout stage of the Champions League he reached, as well as winning LaLiga and the Copa del Rey.

We have 64 guests and no members online