It has long been proven that you can pretty much claim that anything exists these days.

Repeat your opinion often enough and loud enough, make accusations that stick long before the facts have been established and complain that you've been 'cancelled' in your glossy magazine interview or to your thousands of Twitter followers. People will listen. Many will agree.

You'll get that validation that you're looking for and that will allow you to go on spouting your version of the truth. The narrative that best fits your needs.

All of this has far reaching consequences that are much more important than a Champions League group stage exit of course, but there was an element of it at play on Tuesday night.

It was an element that seemed to suggest that Manchester United falling 3-0 down to RB Leipzig and ultimately getting knocked out of the Champions League was just something that was happening to Ole Gunnar Solskjaer, the Manchester United manager, and not anything he could actually do something about.

It was out of his hands. Couldn't help it. Just one of them really innit, Gary. What did you expect?

On BT Sport's coverage of the match, Rio Ferdinand and Paul Scholes tantalisingly skirted around the edge of actually criticising Solskjaer, the manager who might have avoided this mess if only he'd substituted Fred against PSG last week.

But in the end they didn't.

David de Gea's rather weak attempt at trying to stop the third goal scored by Justin Kluivert - who was a yard away from the Manchester United goalkeeper and stood all by himself - was picked up on, as was Harry Maguire's post-match interview in which he admitted they simply weren't at the races for the first 20 minutes.

Solskjaer even invited the pair to criticise him when he accepted blame for that poor start, saying that it was the "manager's responsibility to get everyone ready" for the game. Like a parent wrapping their child up to embrace the cold. 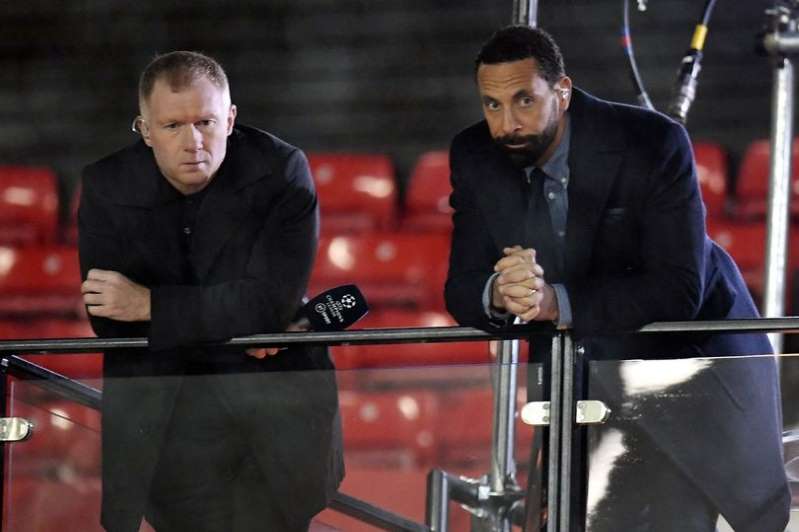 But still an icy silence.

Scholes and Ferdinand were more bothered about individual errors and performances, while Owen Hargreaves sensed it was time to dip into the now well-worn sporting director chat.

On BBC Radio Five Live, Phil Neville laughably said there was "a witch-hunt" against Solskjaer, while Peter Schmeichel on CBS Sports went into a long old speech that included all the hits - young players, signs of progress, bad apples to get rid of, needing more players, Liverpool, Jurgen Klopp, Liverpool sticking with Jurgen Klopp, needing more players again, Liverpool again, individual errors. They were all there.

Actually, back to Neville again.

He added that there is "an awful narrative where the minute United lose a game it seems like a disaster," and that there are managers "who are below United in the league but have great reputations and don't get the stick Solskjaer gets."

Leaving aside the question of just who those managers are and where that stick is coming from at the moment, because that's not really apparent, surely the defeat that knocks you out of the Champions League at the first hurdle is, in terms of football results alone, quite the disaster when you're Manchester United?

So shouldn't Solskjaer at least face some scrutiny over the awful start to the game that put his side in that position?

Of course Scholes, Ferdinand, Hargreaves, Schmeichel and Neville don't want to be seen to stick the boot in on their mate, but wouldn't a bit of constructive criticism be good right now?

Wouldn't it help us see Solskjaer in a different light? Perhaps as a football manager who could one day convince you he's got control of a situation, and isn't just stuck in the middle of it having that situation happen to him?

Roy Keane has been criticised for his failure to hold Solskjaer to account in the past, while Gary Neville - who has remained completely silent on the Leipzig loss on social media, interestingly - has also been accused of being a little too lenient on his old teammate.

It doesn't have to go completely the other way, of course.

ESPN's Frank Lebouef told Solskjaer to leave the club after the defeat, while over in Ireland RTE's Damien Duff got a bit personal when he criticised the manner of the Norwegian's "happy go lucky" post-match interviews.

It doesn't need to be drastic, but it could just do with being there.

Contrast Solskjaer's performance to the likes of an Unai Emery or a Maurizio Sarri during their times in England, and the criticism that the former Arsenal and Chelsea bosses got seems a little over the top in comparison.

The repeated desire to cite Klopp and Liverpool as an example of how time heals all wounds doesn't really help anyone either, and is wildly disrespectful to the good work the German did in his first couple of years in the job.

Solskjaer might ultimately not be the man to take United to where they want to go. It certainly doesn't appear that way anyway, as he quite literally just hasn't.

So how about calling him out on that? Treat him as if he could have avoided that disappointment if only he'd taken different actions, which he'll learn for next time.

The reluctance to do any of that remains baffling, and feeds into the sense that the club are just circling and circling and not really getting anywhere.

How's that for an awful narrative, Phil?

We have 106 guests and no members online