It was a historic, triumphant night for women in music at the 2021 Grammys, as a range of female artists took home the top awards. HER took home song of the year for the Black Lives Matter anthem I Can’t Breathe, Taylor Swift became the first woman to win album of the year three times, and the rapper Megan Thee Stallion won both best new artist and best rap performance for her Savage remix with Beyoncé, now the most awarded singer (male or female) and female artist of all time.

The cascade of performances and success for black female artists glossed over a growing wave of criticism over the Grammys’ opaque nomination process, alleged conflicts of interest and years of appearing to snub black artistry. The Canadian artist known as The Weeknd, real name Abel Tesfaye, led an anti-Grammys chorus which included such artists as Zayn and Drake, after his album After Hours, a critical and commercial smash containing the year’s biggest song, Blinding Lights, was surprisingly shut out of nominations. In a statement to the New York Times last week, the Weeknd said he would boycott the awards from now on and direct his record label not to submit his music for future contention, citing the anonymous committees with final say on nominations. 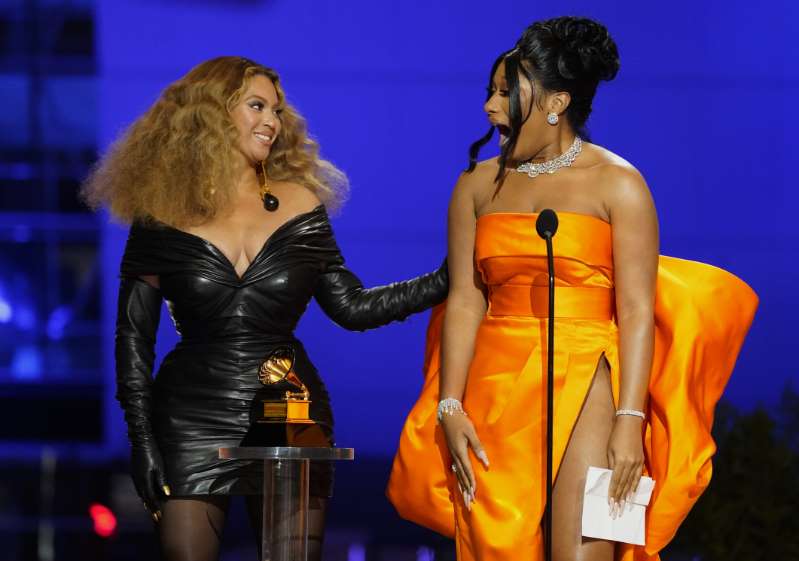 But the controversy mostly stayed outside the frame on Sunday, save a statement in the final 10 minutes from the interim Grammys president, Harvey Mason Jr, promising a renewed diversity effort and calling on artists to “work with us, not against us”. Instead, the 3.5-hour mega-concert was about “bringing us together like only music can”, said the night’s ebullient host, the Daily Show’s Trevor Noah, and “never forgetting what happened in 2020, but hope for what is to come”.

Noah mostly served to line up the roll of performances grouped loosely by genre, from pop/rock (Harry Styles, last year’s Grammy sweeper Billie Eilish, sister-act Haim), to country (Mickey Guyton, performing Black Like Me, a rejoinder to a genre notoriously unwelcoming to black and female artists, then Miranda Lambert and Maren Morris with John Mayer). Bad Bunny – the most streamed artist of 2020 – foreshadowed the reopening of clubs in a light tunnel, while Dua Lipa, whose album Future Nostalgia took over early quarantine in 2020, went full Studio 2054 with DaBaby for their remix of Levitating.

The night was bisected by a somber, extended in memoriam segment during the still-ongoing pandemic. Anderson .Paak and Bruno Mars channeled the roof-lifting energy of the rock’n’roll pioneer Little Richard, Lionel Richie honored his friend the country star Kenny Rogers, and Brandi Carlile eulogized the Americana legend John Prine with a cover of I Remember Everything. The Alabama Shakes singer Brittany Howard, accompanied by Coldplay’s Chris Martin on piano, carried home the segment with a soulful rendition of her song You’ll Never Walk Alone.

But the evening mostly belonged to not one superstar but several women, particularly black women celebrating black pride, from Megan Thee Stallion’s show-opening win for best new artist, to her jubilant (and heavily censored) performance of WAP with Cardi B, to the Grammy’s final note, a tribute to Beyoncé’s Juneteenth anthem Black Parade. HER won song of the year for I Can’t Breathe, a song written in the wake of the police killings of George Floyd and Breonna Taylor. “We are the change that we wish to see,” she said. “And that fight that we had in us the summer of 2020? Keep that same energy.”

Taylor Swift won her third album of the year trophy for Folklore, while Dua Lipa’s Future Nostalgia won for best pop vocal album. Billie Eilish took home record of the year for Everything I Wanted but dedicated her speech, the night’s final, to Megan Thee Stallion. “You deserve the world, I think about you constantly, I root for you always,” she said. “Can we just cheer for Megan Thee Stallion, please?”

Megan also used her time to thank fellow female stars. Visibly giddy, she accepted the award for best rap performance by remembering the mantra inspired by her childhood idol and fellow Houston-bred star: “What would Beyoncé do, but make it a little ratchet.”

Beyoncé herself spoke while accepting her 28th Grammy for Black Parade. “I wanted to uplift, encourage and celebrate all the beautiful black kings and queens who have inspired me and the whole world,” she said.

We have 333 guests and no members online