Jose Mourinho has hit out at Geoff Shreeves when asked if all is harmonious at Tottenham after their recent struggles.

The Spurs boss, speaking to Sky Sports reporter Shreeves, questioned those discussing issues at the club, for example the divided dressing room and that talismanic striker Harry Kane is looking to leave the club.

In their last three matches, Tottenham lost 3-0 to Dinamo Zagreb and were therefore knocked out of the Europa League, and were pegged back to 2-2 against relegation-threatened Newcastle, losing further ground in the race for European qualification.

🗣 "I don't understand why you ask me? For a week, people are writing and speaking like they know everything."

Jose Mourinho's response to being asked whether the mood in the Tottenham camp is harmonious pic.twitter.com/H2l2FrlU9O

And when asked about harmony in the Spurs camp on Sky Sports Super Sunday, Mourinho responded in a tetchy fashion to Shreeves. 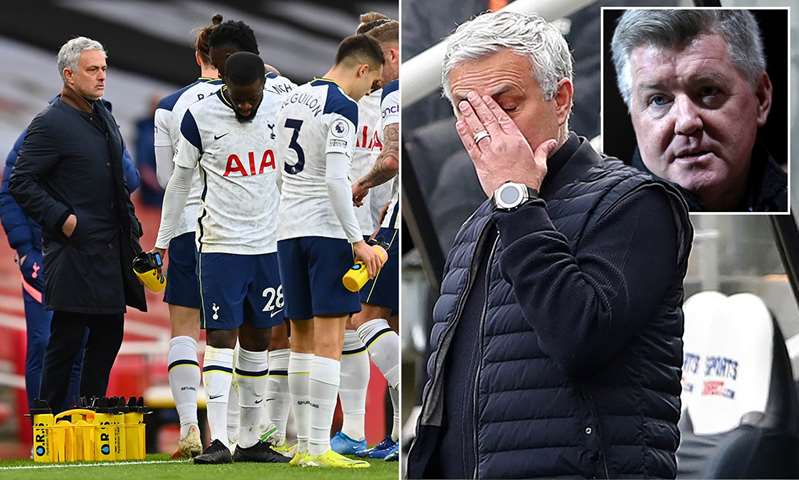 He said: 'I don't understand why you ask me, because for a week people were writing and speaking like they know everything.

'So I don't understand why you ask me, unless you have doubts about what your colleagues spent all week speaking about.'

Spurs currently lie in seventh in the Premier League, three points off Liverpool in fifth and the Europa League places and five points off Chelsea in fourth and the Champions League slots, although they have a game in hand on both.

But Everton, one place below, could overtake the north London side if they win their game in hand, with qualifying for Europe very much up in the air.

Mourinho's side has reached the EFL Cup final at Wembley, where they will face Manchester City on April 25, but if they lose could go another season without silverware and face potentially missing out on European football too.

Before then the Portuguese hosts his former side Manchester United on Sunday before travelling to chasing side Everton the following Friday.

We have 427 guests and no members online