Debenhams has been wound up by a judge in a specialist court.

Judge Daniel Schaffer made a winding-up order at an online hearing in the Insolvency and Companies Court on Monday.

He described the retailer as a "rudderless ship" drifting in an "ocean of insolvency" which needs to be brought into port.

The judge said the Official Receiver now should assess the position.

He had been asked to consider Debenhams' position by lawyers representing a shareholder and debtors.

The judge said he was making a winding-up order of his own motion.

"The company is a rudderless ship drifting in an ocean of insolvency, unable to be rescued," he said.

"It is time for the court to bring this ship into port, so the harbour master, here the Official Receiver, can assess the position." 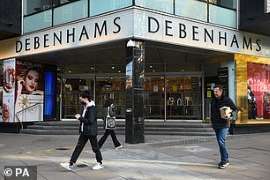 Judge Schaffer made a winding-up order after news emerged that online fashion retailer Boohoo had bought the Debenhams brand and website for £55 million.

The deal will see Debenhams products sold by Boohoo from early next year.

Debenhams had already announced significant job losses and the permanent closure of six stores, including its flagship outlet on London's Oxford Street.

Boohoo said the deal represents a "fantastic opportunity" to target new customers and launch into the beauty, sports and homewares market for the first time.

Debenhams went into administration in April 2020.

A barrister representing Frasers Group had asked Judge Schaffer to consider a number of preliminary issues at Monday's hearing.

He said Debenhams was not trading and had no directors in office.

Another judge had considered Debenhams' plight in May 2020.

Judge Mark Mullen said then that Frasers Group, which owned nearly a third of Debenhams' shares, had issued a winding-up petition.

We have 152 guests and no members online