Tommy Fury has revealed he is travelling to Las Vegas for a boxing training camp amid the Covid-19 crisis, and will be leaving girlfriend Molly-Mae Hague at home.

The former Love Island star, 21, took to Instagram on Friday to reiterate to fans that he was going to the camp to further develop his career in the sport, and the trip was entirely 'work based' so he was allowed to travel.

Sharing a picture outdoors, he wrote: 'It's goodbye to home for a bit. My next camp is based in Las Vegas to I'm travelling there tonight, due to this being a completely work based trip I am able to travel.

'This is such an incredible opportunity for me and I've waited for a camp in Vegas my whole boxing career.'

Tommy went on to stipulate: 'I just want to stress that this is absolutely not a holiday. This is my job.'

The reality star went on to share a picture alongside Molly-Mae, who hid her face as he wrote: 'Gonna really miss this one @mollymae.'

He also shared a photo of his suitcases, showing that he was all packed and ready to go on his exciting trip.

On Wednesday, Tommy was forced to defend himself after critics accused him of flouting coronavirus travel rules by failing to wear a mask while on a train. 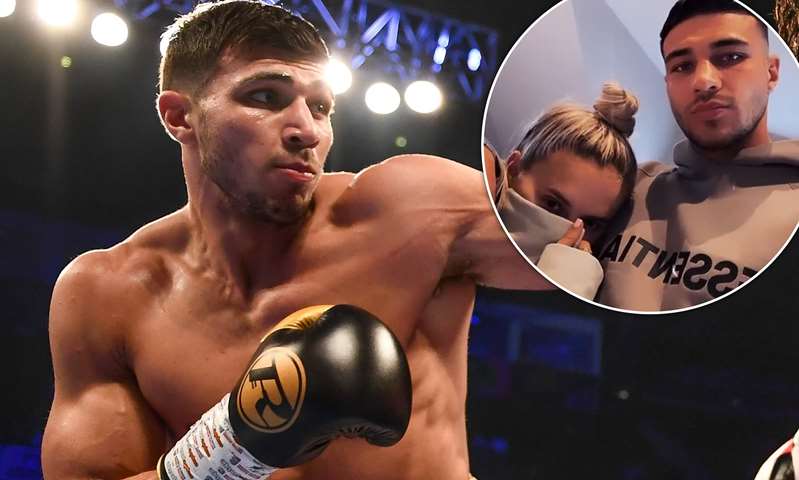 The Love Island star shared a video of himself travelling in First Class from London to Manchester after visiting the Capital for work.

In the clip, Tommy appeared to be travelling in an empty carriage, but the operator - Avanti West Coast - stated travellers must wear face coverings unless exempt.

The reality personality shared the post of himself relaxing onboard alongside the caption: 'Full carriage to myself.'

A spokesman for the boxer, who was hosting coverage for BT Sport last weekend, said Tommy only removed his mask to have a drink of water.

They told The Sun: 'This story was taken while Tommy had his mask off to drink water and I am sure you saw his other story which showed a completely empty carriage (he was the only person in it).

'Tommy has posted many pictures over the last few months of him wearing a mask.It was taken out of context. I can appreciate the confusion.'

MailOnline contacted Tommy's representative for comment at the time.

An Avanti West Coast spokesperson said: 'In line with government guidance, you must wear a face covering (unless you are exempt) when you're at a station and whilst onboard a train.

Government guidelines also says that it is a legal requirement to cover your face with a mask while travelling on public transport.

Reference: Roxy Simons and Charlotte Dean For Mailonline  2 days ago

We have 179 guests and no members online